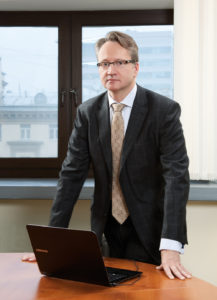 Jon Hellevig is Partner of Awara, one of the leading business administration and outsourcing firms in Russia in the fields of human resources (recruitment, executive search, training), accounting, tax compliance. Hellevig has gained solid experience in Russian business administration, having worked and lived in Russia for more than 20 years since the start of market reforms in early 1990’s. Hellevig also functions as Partner of BRICS Consulting, the law firm of Awara. He is a member of the Supervisory Council of the training firm and seminar organizer Awara Eduhouse Training.

Hellevig started his career in Russia as lawyer and CFO for an American-Russian joint venture and subsequently worked as lawyer and CFO for Armstrong World Industries (Central and East Europe). He was a member of the Board of AEB (Association of European Businesses), the most influential business association for foreign companies in Russia, from 2012 to 2014.

As Partner of Awara and in view of his long experience in Russian business and Russian culture, Hellevig is also involved in organizational consulting and executive search.

From his professional activities in law Hellevig has developed an interest in the philosophy of social practices, human behavior, law and democratic competition. These interests have further led him to study the fundamentals of human knowledge, which according to Hellevig, are founded in social practices, which in turn represent actions based on individual interpretation of feelings. The latter ideas form the premises for Hellevig’s linguistic theories as expressed in his book The Case Against Chomsky.

He also wrote Expressions and Interpretations, a book on the philosophy of law and the development of Russian legal practices; All is Art. On Social Practices and On Democratic Competition (2007 English, 2009 Russian Vse Tvorchestvo); The Case Against Chomsky – A Biological Philosophy Volume 1 (2010);Mental Processing – A Biological Philosophy Volume 2 (2010); and Employee Engagement in Russia, which can be downloaded from this link.

Hellevig takes active part in public discussion of current affairs and social structure, contributing with articles and commentary in the media. He regularly lectures at international seminars on topics within his specializations.

Before entering the Russian market, Hellevig gained experience at the Central Bank of Finland; the successor bank of present day Nordea; and the private bank which is now called Mandatum, having been a co-founder of the latter. Jon Hellevig has a University degree in Law from the University of Helsinki, Finland (1985). In 1998 he acquired an MBA at the Ecole Nationale des Ponts et des Chaussees and University of Bristol Graduate School of International Business with KPMG European Training Center, 1998.

Jon Hellevig is multi-lingual with respect to English, Russian, Swedish (native) and Finnish (native), and also has knowledge of Spanish, French and German, without being conversational in the last three.